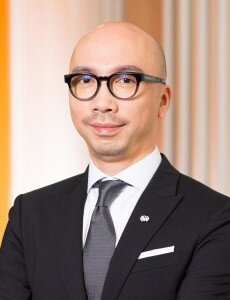 Mr. Ho is a member of the Industry Advisory Committee of Insurance Authority, the Deputy Chairperson of CPA Australia Greater Bay Area Committee, a member of the China Committee of Hong Kong General Chamber of Commerce, a committee member of the Chinese People’s Political Consultative Conference of Shenyang, a standing committee member of the Youth Federation of Inner Mongolia and a vice chairman of Inner Mongolia & Hong Kong Youth Exchange Association. Mr. Ho holds a Bachelor of Commerce degree and a Bachelor of Laws degree from The University of Sydney, Australia and was admitted as a solicitor in New South Wales, Australia and England and Wales and as a solicitor and barrister in the High Court of Australia. He is also a fellow member of CPA Australia. Mr. Ho has extensive experience in the area of corporate management, investments, corporate finance, merger and acquisition transactions and international brand and retail management.

Mr. Ho has been appointed as Independent Non-executive Director in January 2017 and is also a member of the Audit Committee, Remuneration Committee and Nomination Committee.